To go where the day takes me. 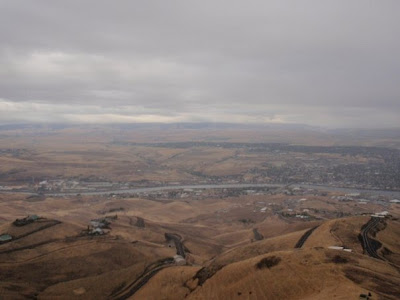 My whirl adventure started On August 18 ( I know, my positing is a little behind. What can I say, I've been having way too much fun: ) I headed out of Sacramento to Portland Oregon to crash with a fellow Cannonballer Karen Giezyng house. She and I got a chance to scoot out and about in town. Experiencing some of the local flavor, we stopped by Voodoo Doughnuts and tried their infamous Bacon Maple Bar. As the name suggest, it's maple bar with two crispy pieces of pork fried product atop! Never has something that sounded so wrong tasted so right! Delicious! Afterwards we scooted over to see the folks at Modified. They do screen printing there, and it just so happened that they were working on the official Cannonball t-shirts. Our short visit was colorful to say the least. As we parted ways, I was looking forward to meeting up with her at the starting line.

Next up on my agenda, I popped over to the other side of Washington to see some of my favorite Bastards, Blood and Styff. Good times are to be had for certain whenever you find yourself in their company. However, this visit was a special treat. It was Styff's birthday! The weekend was chocked full of fun-ness. We volunteered with the fire department at the Clarkston Brewfest,met loads of great people, listed to music, and even got to taste a few samples. Bloody cooked up a tasty birthday dinner, and we celebrated all weekend. Oh yeah, I also got to scoot up the Spiral Highway (again) and it was even better than I remembered it....ahhh, so twisty!

Onward to the cabin in Idaho! I drove up there to say hello to my parents and drop off my car and trailer. While the weather was less than perfect, the company was. Bloody and Styff came up for a bit. It just so happened to be Laughing Dog Brewery's
5th anniversary party. So, meeting my friends there, we enjoyed more music, more beer and more great people. Also, they had a trivia contest, and we rocked it! We got to enjoy the cabin for a bit, then Bloody and Styff had to say goodbye (damn jobs getting in the way of fun)

I was getting ready to say goodbye to Idaho as well. I left the car in the garage and (gulp)packed my life into the SYM RV250. And, it surprisingly fit! I planned to make my way up to Vancouver for a rally. So, the scooter part of my journey begins.......but that's for next blog : )
Posted by Bodacious at 7:58 PM 2 comments:

To pack for the trip of a lifetime 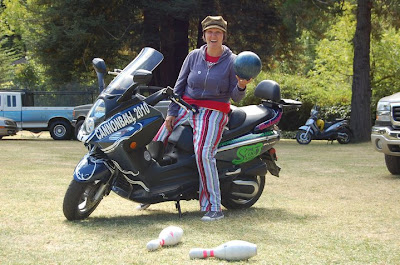 Funny how time flies. For me, it went from toying around with the idea of actually competing in Cannonball last summer, to "Oh my God! I'm really doing this. And, it's less than a month away!"
It seemed like I had been waiting so long for my cross country adventure to start. It felt like it was so distant. That it was some abstract idea. So, why all the sudden did the reality of leaving hit me like a scooter through a brick wall? I think for a few reasons.

Firstly, my SYM RV250 is prepped and ready to go. I have my Givi topcase mounted and have tested it out bu seeing just how much stuff I can cram into it. It turns out, quite a bit. I also got one of Givi's spiffy GPS holders that perches perfectly between my handle bars. Just underneath that, I placed a camel back back pack. It should be a good spot for me to keep my camera at hand while I'm scootin' through checkpoints along the route. Plus, I can squirrel away some snacks!
For me though, the icing on the cake was seeing my custom decals for the first time. Thanks to Andrew down at The Scoot Shop, my scooter now has tentacles on it! (Octopi are kinda my thing) It also states clearly "Cannonball 2010". Needless to say, when I laid eyes on the finished product the vision of my epic journey was all the more clear. "I am riding this scoot across the country and back"!

It's hard to express the overwhelming feeling of excitement. Even as I sit here just typing about it I have big time butterflies in my belly (in a good way). So, as I get ready to migrate up north(I'm going to visit some friends along the way) trailering to northern Idaho before scootin' to Vancouver to attend the Olympibad Rally before the main event. I'm trying to think of last minute details. I'm packing for a trip of a lifetime!
Posted by Bodacious at 6:01 PM 5 comments:

To Find The Perfect Road.

Living in Northern California, there is an excessive amount of beautiful back roads and highways to explore. I am always on the quest to find the perfect road to fit me and my scoot. While what I want to experience on my ride may vary day to day, currently my list topper is HWY128.

You might be wondering what makes a perfect road, being that perfection is subjective. In my book it usually has to include a few things....Tight twisty turns, long sweeping curves, fast zippy straight a ways, outstanding scenery, minimal traffic and an awesome destination.

Too much to ask for, you might say. Not when you riding the route from Winters to Calistoga CA. Hop onto this highway about 30 min northwest of Sacramento, and 10 miles out of town you'll be climbing over the Coastal Range along Lake Barryessa. From there, you can take a few different paths to get over to Napa/St. Helena/Calistoga. Passing along the way rolling hills with oak trees covered in Spanish Moss, vineyards and spectacular views.

When you pop out in the valley, there are a ton of things to do and places to eat. This time around we checked out Taylors Automatic Refresher for some tasty burgers and calamari with garlic aioli. Afterwards, we ventured over to Castello di Amorosa, a winery in St. Helena. We wondered through the cool stone passageways and pretended that we were lost in French Castle. A beautiful day all around.

While a have taken this road quite a few times, each adventure has been unique. The highlight that made this ride so special for me, was that I got to take my GoGo Gear jacket out for the first time! http://www.scooter-girls.com/products.html They sent me the Trench, a classic design. It's a medium weight jacket that is super fashionable (I’m wearing it in my profile pic) but still has armored protection like traditional motorcycle gear. They really nailed the design. The fabric has just a little stretch to it for effortless movement; along with its belted waist, it hugs my curves nicely. Some of the other thoughtful features the ladies at Go Go Gear included are plenty of highly reflective accents for great visibility, a silky lining that feels divine, oversized buttons that are easily fastened/unfastened while riding and my favorite....wind cuffs! I'm in love with this jacket (if you couldn’t tell already: ) I felt stylish and safe while sporting the trench.

So yes, my list topper right now is the lovely HWY 128. However, the summer is still young and I have plenty of more exploring to do. In fact, I’ll be heading out to Yosemite for the first time to ride with friends over weekend. I look forward to packing up the SYM, throwing on my trench and heading down HWY 49 along the Sierra Nevada. Who knows, maybe HWY 128 will get bumped to second place.
PS: I'd love to hear about some of your favorite roads to ride!
Posted by Bodacious at 2:38 PM No comments:

I always wanted to go cross country. In fact, I set out to do just that when I was a wee 18 year old with a Jeep Wrangler and some cash to burn. My goal: Drive across the US via Interstate 10, hitting the south to end up in the Florida Keys. Alas, my adventure was ill planned, and I ran out of funds in Sedona Arizona. Not that I didn't have a blast enjoying the feeling of my first long journey alone, I still felt stifled that I didn't set out what I meant to do.....make it across the US.

Cut to several years later and my new found passion, scooting. I got my first scoot in 2007, a modern 250cc, and couldn't get enough of it. The feeling of being surrounded by the elements while scooting down a remote twisty country road was my new favorite thing to do. My brother was into motorcycles, so often times we would take off together for long rides out to to coast or up into the foothills. My scooter was powerful enough to get on the freeway and keep up with him (as long as he kept it under 80mph: )


On one of our excursions to San Francisco, we stopped by the SF Scooter Girls "Streets of San Francisco" 2008 Rally. This is where I found out that such a thing as Scooter Cannonball existed (and my dis-jointed story comes together)http://www.scootercannonball.com/ The competitors were attending the rally and leaving shortly after for a 10 day race across the country on scooters!!! I was so excited for them! What a flipping cool thing to do! Immediately I wanted to join them, but an adventure like that takes some planning. Come to find out the Cannonball is every other year, the next one being 2010....plenty of time to plan for that one.


So, I made up my mind to do Cannonball. Easy enough, right? All I need is fundidng for 10 days across the continate. Hotel, gas, food, GPS, passport ( Cannonball is going north this year with part of the route going through Canada) Oh, and I guess I need to get back to the west coast...can my scooter that already has 25,000+ miles make it?

Just when I was starting to get overwhelmed thinking this was finacialy out of reach, relief came in the form of my friends down at The Scoot Shop, http://www.thescootshop.com/ . Who knew of my goal, and whole heartedly supported it. They, along with SYM Scooters, offered to sponsor me for Cannonball. They have graciously let me have a RV250 for the summer so that I can get to know it. I'll be racing it in the 250 class with 15 (at last count) other riders.

I'm counting down the days till September, waiting to get my cross country fix! In the meantime, I'll be attending every scooter event possible and will be blogging about all the good times to be had along the way.....

Cynthia
AKA Bodacious Bastard
Posted by Bodacious at 11:08 AM